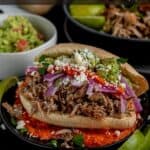 This tortas ahogadas recipe = ultimate Mexican sandwich bliss. Crusty bolillo bread rolls are stuffed with pork carnitas, then smothered in a red chili sauce. Top with guacamole, pickled red onions, and cotija cheese, then finish it all off with a squeeze of fresh lime juice.

When I was a teen growing up near the border, my uncle owned a Mexican restaurant where I liked to hang out after school. Why hang out at a restaurant? Well for the food of course! My cousins and I could order anything we wanted on the house, which is a pretty sweet deal when you’re 14. I always ordered a machaca burrito or a torta ahogada like the one you see here. Add a couple of Jarritos sodas or maybe a cold glass of horchata on the side? Perfection.

I won’t tell you how many years ago this was (ahem, a lot), but that restaurant has long since closed. And now, in my rural neck of the Northeast woods, it’s impossible to find authentic Mexican food like I remember. So, what’s a gal to do but roll up her sleeves and get busy in the kitchen? That’s exactly what we’re going to do here folks! Get ready to make some tortas ahogadas and meet your new favorite Mexican sandwich.

Tortas ahogadas literally means “drowned sandwiches.” Essentially, these are tortas (sandwiches) that are smothered in red chili sauce. The sauce can be spicy or mild depending on where you order it from. (My chili sauce below is medium-spicy.) According to legend, this kind of sandwich was created by mistake when a street vendor accidentally dropped a torta into a bowl of salsa.

There are two ways to eat a torta ahogada:

What is the Chili Sauce Made Of?

The chili sauce is simple to make. You just rehydrate the chili peppers, roast Roma tomatoes, then blend them with the other sauce ingredients. Simmer the sauce for a bit, then voila! Homemade chili sauce. Here’s what’s in the sauce:

How to Make Tortas Ahogadas

Before you assemble your sandwiches, you’ll first need to gather your ingredients and make the chili sauce. You should also gather your fixings, whether they are homemade or storebought.

Watch How to Make It

See how to make the chili sauce and then assemble your tortas ahogadas:

Do I Have to Use Bolillos?

No, you don’t have to use bolillos. In fact, in Guadalajara these sandwiches are made with birotes, which are essentially sourdough bolillos. (I will share a birote recipe soon!)

You can also use a sourdough roll or a French baguette. The key is that you want a crusty bread that will hold its shape reasonably well when you add the wet chili sauce on top of it. This is especially important if you want to eat the torta with your hands – if you use a roll that is too soft, it will fall apart after it’s been drowned in the sauce.

What Goes with Tortas Ahogadas?

These are pretty much a meal on their own, but a nice cocktail is always a good idea in my opinion. These tortas would go well with a Blood Orange Margarita, Pomegranate Margarita or a Mango Mojito.

For non-boozy options, I’d recommend a horchata, Mango Lemonade, or a Roy Rogers drink. If you find Jarritos in your area, I highly recommend serving some of those chilled with tortas ahogadas.

Can I Store Extras For Later?

For the torta: You can store the separate components of the sandwich in order to make another one later, but the assembled torta does not keep well. The bread will become too soggy if it’s allowed to sit in the fridge and the guacamole will brown. So instead store your bolillos on the counter, the carnitas and chili sauce in the fridge etc., then assemble another sandwich when you’re ready to dig in. 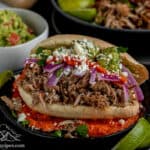 This tortas ahogadas recipe = the ultimate Mexican sandwich bliss. Crusty bolillo bread rolls are stuffed with pork carnitas, then smothered in a red chili sauce. Top with guacamole, pickled red onions, and cotija cheese, then finish it all off with a squeeze of fresh lime juice.

For the Chili Sauce

Gather your ingredients. Make the bolillos or get some crusty bread rolls. Make the pork carnitas. Get out your guacamole and pickled red onions if using. (See recipes linked above.)

Rehydrate the chilis. In a shallow saucepan, bring 1-2 cups of water to a low boil, add the chili peppers and remove from heat to allow the peppers to soak and rehydrate. Once soft in texture, remove the stems and interior seeds.

Roast the tomatoes. On a medium-sized baking sheet. Place the halved tomatoes face side up on the pan. Drizzle with olive oil and place under the broiler for about 10 minutes on low, or until they are soft in the middle and the skin is slightly roasted.

Simmer the sauce. Pour in a small saucepan and simmer for 10 minutes.

Assemble the sandwiches. Slice the bolillo rolls lengthwise and top with the generous helping of pork carnitas meat. Slather with the desired amount of chili sauce and then top the sandwich off with pickled red onions, homemade guacamole, and fresh cotija cheese. (Plus whatever other fixings you want.) Spoon sauce onto your plate and place the sandwich on top of the sauce. Serve with a few lime wedges.