Skip to content
Don't miss a new recipe!
Get an email when recipes are published.
Subscribe Now!
Home » Recipes » Dessert » Tiramisu
Jump to Recipe·Rate this Recipe 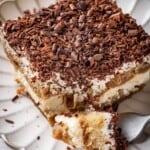 This is the king of no-bake desserts! Tiramisu is an incredibly simple Italian treat that hits the spot when you’re craving something cold, creamy, caffeinated, and a little bit boozy. It’s the perfect pick-me-up.

Tiramisu is one of my favorite no-bake desserts when I’m not in the mood to turn on the oven but still craving something sweet. The flavor combination is perfect. It’s like your favorite morning coffee went on a trip to Italy and married spiked mascarpone cream, soft ladyfingers, and bittersweet chocolate shavings. As fancy as it sounds, it’s actually easy to make. And what’s not to love about that?

It takes less than an hour to put this tiramisu recipe together. Then it just needs to chill in the fridge for at least 5 hours, during which time the ladyfingers will soak up all the flavors. The end result is creamy and spongy goodness bursting with coffee and chocolate flavor. You’ll feel like you’re dining at a fancy restaurant when you tuck into this elegant dessert.

Tiramisu is a traditional Italian dessert that’s often enjoyed on summer afternoons with a glass of wine. The name means “pick me up” in Italian, and the flavors do the name justice. It’s light, airy, creamy, and decadent.

The dessert consists of layers of crunchy ladyfingers soaked in strong coffee. These are hugged in between a rich mascarpone-based cream that’s been lightly sweetened and carries a hint of Grand Marnier. All of that is topped off with bittersweet chocolate shavings. Unlike other desserts, tiramisu is best a day or two after it’s made because then the ladyfingers have had a chance to soak up tons of flavor.

The ingredient list is shorter than you’d expect. Thus, the key to making good tiramisu is in using high-quality ingredients. Here’s a quick run down of everything you need. Make sure to scroll down to the recipe card for specific amounts.

Savoiardi, also referred to as Pavesini, is the Italian name for ladyfingers. These are long, thin biscuits resembling the shape of a woman’s delicate fingers. They’re made with sponge cake batter. Piped into short lines and then dusted twice with confectioners’ sugar before baking, this creates a slightly crunchy exterior that guards a soft and spongy interior.

Do I have to Use Grand Marnier?

Grand Marnier, an orange-flavored liqueur, is used in most tiramisu recipes, but you don’t have to use it. If you can’t find it or prefer to use a different type of alcohol, you can substitute it for one of the following: dark rum, brandy, or marsala wine. These create similar flavor profiles that won’t leave you wondering where the taste of Italy went. However, you can also make it alcohol-free and just leave it out if you prefer.

Does Tiramisu Have Caffeine?

Yes. Tiramisu’s signature flavor comes from coffee, so it does have caffeine. If you prefer not to have caffeine in your tiramisu, simply use decaf coffee.

How to Make Classic Tiramisu

Tiramisu is easier to make than you think, especially because it’s a no-bake dessert:

Success is just around the corner for this classic no-bake dessert that’ll make you feel like you’re in the middle of Rome. As long as you follow these tips, you’ll have no trouble plating the perfect slice of tiramisu:

Most of all, it tastes like coffee, alcohol, and chocolate. These flavors are beautifully tied together by the creamy richness of the mascarpone filling in between soft ladyfinger layers.

What does tiramisu literally mean?

Tiramisu means “pick me up” in Italian. In every possible way, it’s a dessert to cheer you up!

Is there coffee in tiramisu?

Traditional tiramisu is always made with strong brewed coffee. If you don’t want it to have as much caffeine, feel free to use decaf.

What kind of alcohol is used in tiramisu?

Grand Marnier is used in most tiramisu recipes. If you don’t have any on hand, you can substitute it for brandy, dark rum, or marsala wine for a similar flavor profile.

Can kids have tiramisu?

In small amounts, kids can definitely enjoy tiramisu. Although it does contain caffeine, alcohol, and raw eggs, it’s harmless to them in moderation and as an occasional treat.

Tiramisu has a very delicate flavor so don’t refrigerate it uncovered. If you’re using a glass baking dish to assemble it, then make sure to cover it with plastic wrap. However, I recommend storing tiramisu in an airtight container to avoid any transferring of odors or flavors from other foods. It will last 2-3 days in the fridge. It might last another day, but the ladyfingers will be too soft by then.

Can I Freeze It?

Yes! Just don’t top the tiramisu with chocolate shavings yet as they won’t freeze well. When you’re planning to eat it, let it thaw in the fridge overnight and add the chocolate right before serving.

In a glass baking dish: Carefully wrap the container all the way around with plastic wrap twice. Then wrap it in aluminum foil once. Make sure there aren’t any parts through which ice crystals could seep through. This method applies to any freezer-friendly container that doesn’t come with a lid. Freeze for up to 3 months.

In an airtight container: Before placing the lid on, wrap the container in plastic wrap once. Then seal the lid in place and wrap the closed container in aluminum foil once. Freeze for up to 3 months. 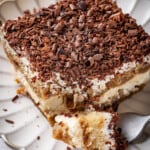 A no-bake classic Italian dessert, this tiramisu is the perfect treat for when you need a pick-me-up. Filled with lots of coffee, alcohol, and a little bit of chocolate, how could anyone resist?

The tiramisu can be made up to 1 day in advance and will keep for 2 -3 days in the fridge.