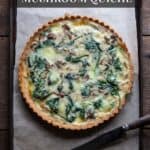 This easy spinach and mushroom quiche has three kinds of cheese and is so easy to make! Serve it with breakfast potatoes, a steaming bowl of soup, or a fresh salad for a simple and satisfying meal.

One of the best things about quiche is how flexible it is. Is it breakfast food? Lunch? Or just an awesome dinner idea? In my opinion, it’s all three. Make it for dinner one night, then enjoy leftovers for breakfast the next morning. Buttery crust paired with a cheesy, savory filling is welcome any time of day.

The fillings are flexible too. I’ve used baby bella mushrooms here, but any variety of mushrooms would do nicely as long as you keep the total amount the same. Similarly, you could swap the spinach for chopped kale or swiss chard. I’ve used a pre-made pie crust for this recipe to make it even easier!

What’s the Difference Between a Quiche and a Frittata?

There are a few key differences:

Easy Tricks for the Best Quiche

In many ways, quiche reminds me of classic Italian pasta recipes like spaghetti carbonara. How so? Well, they both sound fancy and complicated but are actually quite simple if you know what to do. Here are my tricks for perfect quiche every time:

Notes on the Ingredients

I don’t recommend using watery veggies like tomatoes because even if you cook them beforehand they will add too much water to the filling. (Sun dried tomatoes, without the oil, might just do though.)

How Do I Tell When Quiche is Done Cooking?

I like to use the knife test. To do this, take a thin knife and insert it into your quiche, about one inch from the center. If the knife is clean when you pull it out and you don’t see a bunch of uncooked eggy liquid run into the cut you made, it is done baking. Note that since this quiche has a generous amount of cheese in it, the knife can have some melty cheese on it so definitely look for the uncooked egg mixture inside the cut you made as a secondary visual test.

Your quiche will be jiggly when it is done and will finish baking as it cools on the stovetop.

Can I use heavy cream instead of milk?

Yes, you can use heavy cream instead of whole milk in this recipe. You can also replace the half and half with heavy cream.

Can I make this a crustless quiche?

I would not recommend leaving the pie crust out of this recipe, I haven’t tested the filling baking on its own and imagine it would stick to the sides of your baking dish.

If you are having quiche for breakfast, then I recommend a side of breakfast potatoes or bacon. Popovers or sweet potato biscuits would also be a welcome accompaniment!

For lunch or dinner, I usually like to serve it with bowls of soup. This creamy homemade tomato soup or this roasted root vegetable soup would be lovely with quiche. Simple salads also pair nicely with quiche.

How to Store and Reheat Extras

Let your quiche cool completely, then store it in an airtight container in the fridge for up to 4 days. I like to reheat it in the oven so that the pie crust doesn’t get soggy. Heat slices in a 325F oven for 10-15 minutes, or until warmed through.

Can I Freeze Quiche?

Yes, you can freeze cooked quiche for up to 3 months. Let it cool completely, then wrap it in a couple of layers of saran wrap and place it in an airtight, freezer-safe container or ziploc bag. (If you are freezing individual slices, wrap each slice in plastic wrap and place in an airtight, freezer-safe container.) Defrost overnight in the fridge and heat in an oven at 325F until warmed through, about 30 minutes for a full quiche. 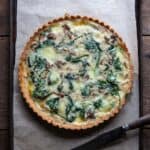 This easy spinach and mushroom quiche has three kinds of cheese and is so easy to make! Serve it with a steaming bowl of homemade soup or a fresh salad for a simple and satisfying meal.

Partially bake your pre-made pie crust according to the package instructions. For instance, if it says to bake at 350 degrees F for 20 minutes, then bake it at 350F for 10 minutes. Remove from the oven and set aside.

Adjust oven temperature. The quiche will cook at 325F so adjust accordingly once the crust has finished baking.

Cook the veggies. While your crust is baking, warm the olive oil in a large pan over medium-high heat. Add the diced onion and sauté until it begins to soften, about 2 minutes. Add the mushrooms and sauté 2 minutes before adding the spinach. Season with salt and pepper to taste and cook until the mushrooms are tender and the spinach has wilted. Remove from heat and set aside to cool.

Make the filling. In a large bowl whisk the eggs, half and half, milk, ½ teaspoon salt, ½ teaspoon paper and nutmeg. Stir in the gruyere, ½ cup of the mozzarella and the mushroom mixture.

Assemble the quiche. Pour this filling into the crust and sprinkle the remaining ½ cup mozzarella and 2 tablespoons Parmesan over the top.

Bake. Your quiche will bake until puffed, golden brown, and just set in center, about 45 minutes.

Cool 30 minutes. Then cut into wedges and serve.