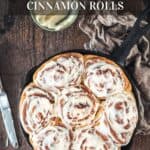 When it comes to baking, fluffy homemade cinnamon rolls are in a league of their own. You just feel accomplished when you make them, ya know? Even though they are not difficult, cinnamon buns are certainly impressive and make your home smell incredible!

If you have never made cinnamon buns before, I have two recipes for you to consider. The one in this post, and my overnight cinnamon rolls. The overnight version is incredibly simple – you just make a sweet yeasted dough, then assemble your cinnamon rolls and let them do a slow rise in the fridge overnight. Bake them the next morning and top them with cream cheese frosting. I 100% recommend that recipe if you are feeling a little intimidated by the idea of making cinnamon buns from scratch.

This recipe in this post is also easy to make! But I do think knowing how to make yeasted cinnamon buns gives you a good working knowledge of how to assemble them and what the whole process looks like, without needing to consider a sourdough starter. If you are feeling daring though, there is no reason you can’t give the sourdough version a try from the get-go!

Here is a quick rundown of some of the key ingredients. Be sure to scroll down to the recipe card for the full list.

How to Make Sourdough Cinnamon Rolls

Making homemade cinnamon buns from scratch is totally worth it and an excellent weekend baking adventure. Here’s how to do it:

Start the dough. Combine the flour, sugar, and salt in the bowl of a stand mixer, then in a second bowl, whisk the egg, milk, and sourdough starter.

Mix. Fit your mixer with the paddle attachment, then turn it on to low speed. Slowly add the liquid ingredients to the dry ingredients. Mix until everything is combined.

Add the butter. Reduce the mixer speed to low and gradually add the butter a pat at a time until it’s fully incorporated.

Let the dough rise. Cover the bowl with a damp cloth and let the dough rise until it doubles in size, or about 10 hours. Make sure you set the bowl in a place that’s warm and free of drafts or it will take longer to double in size.

Roll out the dough. Turn out the dough onto a floured work surface and use a rolling pin to roll it into a rectangle about 18×12 inches in size.

Assemble the rolls. Brush the melted butter onto the dough, then sprinkle it with cinnamon sugar, leaving a border on the edges. Use your fingers to gently press the filling into the dough a bit. Next, roll the dough into a log starting with the side closest to you. Fold in the sides of the dough as you roll it up to prevent any sugar from falling out. Once the dough is rolled up, pinch along the edges with your fingertips to seal.

Cut the rolls. Use a bench scraper or sharp knife to slice the log into 1 1/2-inch thick rolls. Place them in your skillet to rise.

Let the dough rise (again). Brush a 9-inch cast-iron skillet with butter, then place the Sourdough Cinnamon Rolls inside. Cover the dough and place the skillet in a warm place for 3 to 4 hours, until the rolls have doubled in size.

Bake the rolls. Place the skillet in an oven that’s been preheated to 375ºF and bake for 25 to 30 minutes, or until golden brown.

Make the frosting. While the rolls cool, combine the cream cheese, powdered sugar, vanilla extract, and salt in the bowl of a stand mixer fitted with the whisk attachment. Beat at low speed until the sugar has been incorporated into the cheese, then increase the speed to medium and whip the frosting until it’s smooth and creamy.

Frost and serve. Pour the frosting onto the cooled cinnamon rolls and use a spatula to spread it around. Pull apart the rolls and serve immediately.

What If I Don’t Have a Cast-Iron Skillet?

No problem! You can make these in an oven-proof skillet, springform pan, round cake pan, or even a square baking dish. Note that the baking time may need to be slightly longer if you use a glass or light-colored baking dish.

Here are some tips for making this recipe work:

How to Store Homemade Cinnamon Rolls

Can I Freeze These?

Yes, this recipe can be frozen and there are two ways to do it: 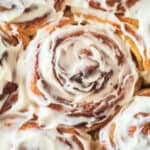 Combine dry ingredients. In the bowl of a stand mixer with a paddle attachment, combine the flour, sugar, and salt.

Mix the wet ingredients, except the butter. In a separate bowl whisk the egg, milk, and fed starter together until no lumps of starter remain.

Combine wet and dry ingredients. Turn the mixer on to low speed and gradually add the liquid ingredients. When the liquids absorb the flour and a rough dough starts to form.

Add the butter, one chunk at a time. Mix until all the butter is incorporated into the dough.

Let the dough rise. Place the dough in a bowl and cover with a damp cloth. Leave at room temperature to rise until doubled, about 10 hours. If your house is cooler it may take longer for the dough to double in size.

Make the filling and assemble

Prep your skillet. Brush a 9-inch cast-iron skillet with butter.

Roll out the dough. When the dough has doubled in size, turn it out onto a heavily floured counter and start rolling in a large rectangle ( about 18×12 inches) using a floured rolling pin.

Add the filling. Brush the melted butter all over the top of the dough. Sprinkle the cinnamon sugar filling onto the dough, leaving a 1-inch border on all sides. Gently press the filling into the dough.

Roll up the dough into a log starting with the long edge closest to you. You may need to use a bench scraper to help you roll the dough, as it may stick to the surface. If it does, just dust a little flour on the bench scraper. Roll it down to the top edge and pinch the edge to the dough log to seal it. Fold in the sides of the dough as you roll it up to prevent the cinnamon sugar from falling out on either side.

Cut the rolls. With your bench scraper or a sharp knife, slice the log into rolls 11⁄2 inches wide. Place each roll in the cast iron skillet, cut side up. You will have about 7-8 rolls.

Second rise. Cover and place in a warm place for 3-4 hours, until the rolls have doubled in size.

Bake. When the rolls have doubled in size, preheat oven to 375 degrees F. Place the skillet in the oven and bake for about 25-30 minutes, or until golden brown. Set aside to cool while you make the frosting.

While the rolls are cooling, make the frosting. Combine the cream cheese, powdered sugar, vanilla extract and salt in the bowl of a stand mixer fitted with the whisk attachment. Mix at low speed until the sugar has been incorporated, then increase to medium speed and continue mixing until you have a smooth frosting, about 2 minutes.

Frost the cooled cinnamon buns. Pour the frosting over the cinnamon rolls and gently spread with a spatula. Serve immediately and enjoy!

The cinnamon rolls can be stored for 2 days at room temperature or up to one week in the refrigerator.