This easy Apple Cider Margarita comes together in minutes and is full of autumn flavor. Made with apple cider and maple syrup – plus a cinnamon sugar rim – this is one of my favorite holiday cocktails!

Summer is made for Frozen Strawberry Margaritas, but fall is made for Apple Cider Margaritas. This festive cocktail comes together in minutes and is full of autumnal flavors thanks to fresh apple cider, cinnamon, and apple slices. I like to add fresh orange juice and maple syrup, then rim the glass with homemade cinnamon sugar.

This recipe is based on my husband’s legendary mulled apple cider recipe. And yes I do mean legendary! He has been making it every year for as long as I’ve known him (which is a very long time). Every time he makes it for the holidays people can’t help but come back for seconds or thirds. Then the next year they ask if he will make his mulled cider again… meaning they remember that sip a year later!

This apple cider margarita captures the flavor of my husband’s cozy mulled cider and transforms it into a cool and refreshing sip that can be shaken up on a whim as long as you have the ingredients on hand.

This margarita is incredibly easy to make, but I did want to share a few quick tips! 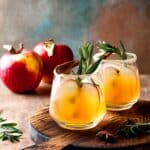 This easy Apple Cider Margarita comes together in minutes and is full of autumn flavor. Made with apple cider and maple syrup – plus a cinnamon sugar rim – this is one of my favorite holiday cocktails!

Rim your glass. Run the orange slice around the edge of your glass, then invert the top of the glass onto a plate with cinnamon sugar.

Pour and garnish. Strain the cocktail into your glass, then garnish with apple slices, cinnamon sticks and a fresh sprig of sage if desired.