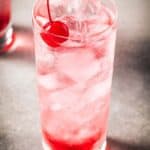 This Shirley Temple drink is a classic non-alcoholic cocktail. Made with ginger ale, grenadine, lime juice, and a maraschino cherry, this easy mocktail recipe is delightfully refreshing on a hot summer day.

This simple Shirley Temple mocktail comes together in minutes and is one of our favorite non-alcoholic drinks to enjoy in the hot summer months. It’s similar to the Roy Rogers drink, which is another mocktail made with nearly identical ingredients, but it doesn’t have any caffeine so it’s especially suitable for young children who want a special drink (and whose parents don’t want them hyped up on caffeine afterward!)

Who Was Shirley Temple?

Shirley Temple was an American child actress in the 1930s who was famous for her dimples, curly hair, and cheery personality. She was a talented singer and dancer who was discovered at the age of 4 by casting director Charles Lamont while she was at a dance class. Lamont invited her to audition for the studio Educational Pictures, and she signed a contract with them shortly afterward. Eventually, she became part of the 20th Century-Fox ensemble and rocketed to superstardom.

What is a Shirley Temple Drink?

A Shirley Temple is a non-alcoholic mocktail made of only 4 ingredients: ginger ale, grenadine, lime juice, and a maraschino cherry. Some modern recipes will replace the ginger ale with club soda or lemon-lime soda. Shirley Temples are a popular drink for children who are dining at restaurants with adults and want a special drink.

When Was it Invented?

According to legend, the Shirley Temple drink was invented when Shirley was at a restaurant with her parents and annoyed that she couldn’t drink the Old Fashioned cocktails they were sipping. The bartender decided to make her a non-alcoholic drink to cheer her up. Interestingly though, as an adult, Shirley Temple said that the drink was not invented for her. She even sued a company that wanted to use her name for a bottled version of the drink.

You’ll only need 4 simple ingredients to make a Shirley Temple:

How to Make a Shirley Temple

If you want to add alcohol to your drink, then technically you’ll be making what’s called a “Dirty Shirley Temple.” The most common kinds of booze added to this drink are rum or vodka. Add about 1.5 – 2 oz of either to this drink when the grenadine and lime juice are added. The more alcohol you add the stronger your drink will be. (Note that if you use dark rum, then the drink is called a “Shirley Temple Black.”) 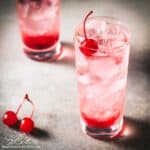 This Shirley Temple drink is a classic non-alcoholic cocktail. Made with ginger ale, grenadine, lime juice, and a maraschino cherry.

Add ice to a tall glass. Pour the grenadine and lime juice over the ice.

Add the soda and give everything a good stir.

Top with a cherry and start sipping!

For a Dirty Shirley Temple drink add 1.5 – 2 oz of vodka or rum along with the grenadine and lime juice.