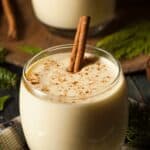 This easy rompope recipe makes the perfect boozy Mexican holiday drink. Flavored with hints of cinnamon and cloves, you can serve this creamy Mexican eggnog warm or on the rocks.

If you love cozy drinks around the holidays, then this Mexican eggnog recipe may be just the thing. It’s creamy, silky, and beautifully spiced with hints of vanilla. Rum adds notes of toasted sugar, plus a boozy kick!

In Spanish, Mexican eggnog is called rompope and two of its signature traits are a golden color and rich smoothness. The color comes from the number of egg yolks used to make rompope (24 to be exact!), while the creaminess comes from a combination of heavy cream and sweetened condensed milk.

Simmered until slightly thickened, this classic Christmas drink was a staple in my house growing up. You have to try it! And if the idea of making eggnog from scratch sounds complicated don’t worry, it’s not. Ready in 30 minutes, all you really need to do is mix everything up, then keep an eye on the temperature of the mixture as it cooks on the stove.

Rompope is a holiday drink in Mexico that dates back to the early 1500s, when the Spanish arrived in Mexico and introduced Catholicism. It was considered a drink for the upper class, so nuns from the Santa Clara Convent in the city of Puebla only prepared it for religious and political figures.

Primarily made from egg yolks, milk, and rum, it’s a lot like traditional eggnog. Nonetheless, it was flavored differently depending on the region. Pecan, pine nut, and coffee were some of the most common flavors.

Over time, rompope was popularized and earned a place among traditional Mexican beverages because of its irresistible creaminess.

What is Rompope Made Of?

It’s just like making eggnog! That means the main ingredients on your list should be eggs, milk, and rum. Check out the recipe card at the bottom of this post for exact ingredient amounts.

Switching things up with rompope is quite simple. All you need to do is add the new flavor profiles either at the beginning or end of the recipe.

Can You Make Rompope Without Alcohol?

Of course! Just omit it at the end of the recipe, right before refrigerating it. Alcohol-free rompope is kid-friendly too.

How to Make Rompope

Don’t let the number of egg yolks intimidate you. Making rompope is very simple as long as you keep an eye on the temperature of things.

Tips for the Best Mexican Eggnog

Follow these tips to make the perfect rompope every time:

On its own, rompope is great when warm or chilled and served on the rocks. For extra flavor, dust it with additional ground cinnamon, nutmeg, or unsweetened cocoa powder. Using large cinnamon sticks for stirring adds a fun holiday-vibe too.

If you’re not a fan of dunking, enjoy your Mexican eggnog with conchas, marranitos, or any variety of Mexican sweet breads.

How Long Will Homemade Eggnog Last?

Homemade eggnog doesn’t last as long as the store-bought kind. Keep it in an airtight container in the back of the fridge for up to a month.

Don’t keep it at room temperature like commercial rompope because the homemade kind doesn’t have any food preservatives to offset the decomposition of egg yolks and milk in the recipe. 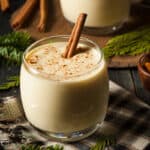 Rich and creamy, rompope is perfect holiday drink. Spiked with rum and spiced with cinnamon and cloves, it’s full of comforting, boozy sips.

Simmer. Bring the mixture to a boil over medium-high heat and immediately reduce to medium-low. Simmer for 10 minutes to allow the cinnamon and whole cloves to release their flavor. Stir continuously to avoid the milk from developing a film.

Beat the yolks. Remove the pot from the heat and set it aside to cool. Meanwhile, place the egg yolks in a large bowl. Use a hand mixer to beat them over medium speed for 4-6 minutes or until they turn pale. You can also use a whisk, but it’ll require more time and effort.

Mix the milk and egg yolks. Once the milk is fully cooled or lukewarm, slowly pour the egg yolks into the pot while whisking vigorously. Don’t stop whisking in case the milk is still slightly hot, otherwise the yolks will cook.

Cook. When fully incorporated, place the pot over medium-high heat for 5-8 minutes. Stir continuously to avoid the rompope from curdling and developing a film. Remove from the heat when the mixture thickens like syrup.

Strain. Remove from the heat and strain the mixture to remove the spices.

Add the rum and cool. Slowly whisk the rum and vanilla extract into the mixture until well combined. Pour it into an airtight container (don’t close it) and let it finish cooling at room temperature. Once cooled, add the lid and refrigerate the rompope overnight.

Serve. Pour it into glasses and sprinkle with cinnamon or nutmeg. Enjoy!