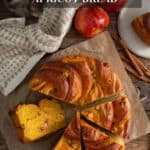 This Pumpkin Apple Apricot Bread is a showstopper! A light, brioche-like pumpkin bread is twisted with spiced apples and apricot jam for an autumnal treat that’s sure to impress.

When we talk about pumpkin bread, we’re usually talking about a dense, moist quick bread. This recipe for Pumpkin Apple Apricot Bread is different, though — it’s not a quick bread because it’s made with yeast, which means instead of being dense, it’s airy and soft. This is the kind of bread that gives you a sense of accomplishment when you take it out of the oven. In fact, I wouldn’t blame you if you gazed at it adoringly while it cools.

Bread is just one part of the equation in this recipe, though. There’s also the filling! Buttery, cinnamon-scented apples are cooked until tender, then spooned over a layer of apricot jam and braided into the pumpkin bread. While pumpkin and apple are often paired together, the apricot jam might seem a little bit out of left field. Trust me, it works! It has a slightly tart flavor that complements the sweet apples without overpowering them.

Ready to roll up your sleeves and get started? Here’s what you’ll need to make Pumpkin Apple Apricot Bread:

This recipe takes some time to make, but much of that time is spent letting the dough rise and then bake. The actual work of kneading and braiding and forming is actually very satisfying!

Activate the yeast. Combine the milk, yeast, and a tablespoon of flour in the bowl of a stand mixer and let it rest for 5 minutes.

Make the dough. Add the pumpkin, spices, brown sugar, salt, egg, and melted butter to the stand mixer bowl and mix until combined. Then, add the flour 1/2 cup at a time, mixing well between each cup. Once the dough starts to pull away from the sides of the bowl, switch to the dough hook. (If you’re making the bread without a stand mixer, switch to a wooden spoon.)

Knead the dough. Knead the dough for 4 minutes using a stand mixer, adding more flour a tablespoon at a time if needed. To make the bread by hand, turn out the dough onto a lightly floured work surface and knead for 4 to 5 minutes, dusting with additional flour as needed. The dough is done when it springs back after you press your thumb into it.

Let the dough rise. Grease a large mixing bowl or pot with a teaspoon of olive oil, then add the dough. Turn it once to coat the dough with oil, then cover with plastic wrap. Place the dough in a warm area of the kitchen, away from any drafts, and let it rise until it’s roughly doubled in size, about 1 1/2 to 2 hours.

Make the filling. Melt the butter in a medium saucepan over medium heat, then add the apples, cinnamon, flour, and sugar. Cook, stirring occasionally until the apples are soft. This usually takes about 10 minutes, but it can vary depending on the variety of apples you use. Remove from heat and set aside to cool.

Roll out the dough. Coat a springform pan with nonstick cooking spray. Once the dough has finished rising, punch it down a bit, then roll it out onto a lightly floured work surface until it reaches about 18×10-inches.

Add the filling. Spread a layer of apricot jam onto the dough using the back of a spoon or a pastry brush, leaving a 2-inch margin on all sides. Top the jam with the apple filling. (Make sure the filling has cooled.)

Roll the bread. This is the fun part! Roll up the dough like a jelly roll, then split it vertically with a sharp knife so you have two ropes of dough. Twist them together to create a spiral, then wrap the spiral into a circle that fits into the springform pan. Let the dough rise for another 30 minutes, and start preheating the oven to 350ºF just before this time is up.

Bake the bread. Bake the bread for 30 minutes, then take a peek to see if it’s browning too quickly. If it’s not, leave it be! If it is, tent it with aluminum foil. Either way, continue baking for 10 to 20 more minutes, or until the dough near the center is firm and the bread sounds hollow when you give it a good thump.

Yes, like most bread, Pumpkin Apple Apricot Bread can be frozen, although it’s definitely best eaten within a day or two of making. If you do decide to freeze it, let the bread cool completely, then wrap it tightly in a layer of plastic wrap, followed by a layer of foil. Freeze the bread for up to 2 months, then let it thaw at room temperature.

How Should I Store This Recipe?

Store this bread in a zip-top bag, airtight container, or wrap it tightly in a layer of plastic wrap. It will keep at room temperature for 2 to 3 days

Baking bread is very much a science, so I recommend sticking with the original recipe for the dough. When it comes to the filling, you can get creative: 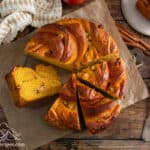 With fall-inspired flavors, a light airy texture, and spiced apple filling, this Pumpkin Apple Apricot Bread is destined to become a family favorite.

In the bowl of a stand mixer or in a large bowl, combine the warm milk, the yeast and 1 tablespoon of the flour. Allow to rest for 5 minutes.

Add the pumpkin puree, spices, light brown sugar, salt, egg, and melted butter. Mix until combined. Add the flour ½ cup at a time, mixing well between additions. When the dough begins to pull away from the sides of the bowl switch to your dough hook, or a wooden spoon if making bread by hand.

If using a stand mixer, knead the dough for 4 minutes, adding extra flour 1 tablespoon at a time, if needed – just enough to keep the dough from sticking to the sides of the bowl. If making the bread by hand, turn it out onto a lightly floured surface and knead 4-5 minutes, sprinkling with flour as needed to prevent sticking. *Note: Although I generally use my stand mixer to knead my dough, I always turn it out onto a floured surface and finish the kneading by hand, for the last minute or so. It’s the best way to know when the dough has been kneaded enough. The dough is done when it’s smooth and bounces back when you press your thumb into it.

Place the dough in a deep container greased with 1 tsp of olive oil. Turn the dough once to coat the top and cover with plastic wrap. Allow dough to rise at room temperature until doubled in bulk, about 1½ to 2 hours.

While the dough is rising, make the apple filling. Melt the butter in a medium saucepan over medium heat. Added the apples, cinnamon, flour and sugar. Cook, stirring occasionally, until the apples are soft, about 10 minutes. Set aside to cool.

Coat a springform pan with baking spray like PAM. Preheat oven to 350F.

When the dough has finished rising, punch it down and roll it out to a rectangle about 18 inches x 10 inches. Spread with a thin layer of apricot jam using a pastry brush or the back of a spoon. Pour the apple filling onto the dough (make sure it has cooled) and spread out over the dough, leaving a margin of about 2 inches on all sides of the rectangle.

Roll up the dough jelly-roll fashion, then split vertically with a sharp knife. You will now have two ropes of dough and filling. Twist them together to create a spiral, then wrap the spiral around itself into a roughly circular shape and transfer to your springform pan. Allow to rise for 30 minutes.

Bake the bread for 40-50 minutes, checking after 30 minutes to make sure it isn’t browning too quickly. If it is, tent with aluminum foil. The bread is done when dough near the center of the bread is firm and the bread sounds hollow when thumped on the top.