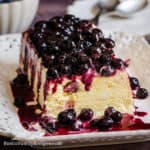 This classic lemon blueberry semifreddo is one of our favorite frozen desserts to enjoy when the blueberries are in season! An easy-to-make Italian recipe bursting with citrus and topped with homemade blueberry sauce.

Line a loaf pan with plastic wrap. Make sure you have enough plastic wrap so that it hangs over the sides of the pan (you’ll need it to cover the semifreddo before freezing it).

Combine the ingredients. Combine the sugar, egg yolks, lemon juice (set aside 2 tbsp juice, we’ll need it for the blueberry topping), lemon zest, and salt in a large metal bowl. Whisk the ingredients together until well combined.

Thicken the egg mixture. Place the metal bowl over a large pot of simmering water and whisk until your mixture looks fluffy and thick (this will take about 5-7 minutes). Once your mixture has thickened, remove the bowl and transfer the mixture to a large bowl. With an electric mixer, beat until it is doubled in volume and has cooled down.

Pour into the loaf pan. Pour the semifreddo mixture into the loaf pan and smooth out the top. (You can also add some blueberries to the mixture). Tap your loaf pan on the kitchen counter to get air bubbles out.

Cover and freeze. Cover the semifreddo with the plastic wrap, and place it in the freezer for at least 8 hours or overnight.

Prepare the blueberry sauce. Place 1 cup of blueberries, vanilla, sugar, and lemon juice in a saucepan. Stir and then bring to a simmer over medium heat. Simmer for 7 minutes until the blueberries break down. Let the sauce cool.