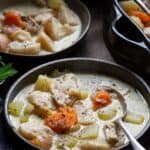 This cozy Knoephla Soup recipe features homemade dumplings and tender chicken breasts. Everything is cooked together in a creamy soup base dotted with sliced carrots and potatoes. Perfect cold-weather food!

This knoephla soup is inspired by one of the few recipes my grandfather used to make when I was a child. He grew up in Poland near the German border and when he felt nostalgic he would cook up a big pot of this cozy soup. Homemade dumplings are cooked in a flavorful broth along with carrots, potatoes, and chicken breasts. The end result is a hearty bowl of creamy soup filled with tender chicken and pillowy dumplings. This is some serious old-fashioned comfort food right here.

Is It Hard to Make Knoephla Dumplings?

If the idea of making dumplings from scratch sounds intimidating, not to worry. These dumplings are actually incredibly easy to make.

All you have to do is stir the knoephla ingredients together in a large bowl until a soft dough forms. Then you roll it out into a rope similar to the way you would roll out Play-Doh as a child. The final step is just using a knife or kitchen scissors to cut the rope into bite-sized pieces. Ta-da! Homemade knoephla.

What Goes With Knoephla Soup?

I always love something bread-y on the side with a bowl of soup. Here are some of my favorite ideas:

Where does knoephla soup originate from? This soup comes from Germany. It is a thick and creamy soup with chicken, potatoes, and dumplings called knoephla. It is popular in areas of the US with communities that trace their roots to Germany, such as Minnesota, South Dakota, and North Dakota. Each region has its own version of the recipe.

What does knoephla mean in German? The name of this soup derives from the German word Knöpfle, meaning little knob or button.

How is knoephla pronounced? The word “knoephla” is pronounced nip-fla.

How to Store and Reheat Leftovers

Let the soup cool to room temperature, then ladle extras into airtight containers and store them in the fridge for up to 4 days.

The dumplings will absorb some of the liquid in storage, so when it’s time to reheat the soup you may want to add some extra broth. You can reheat single servings in a microwave-safe bowl, zapping until everything is warmed through. My preferred method, however, is to reheat this soup in a small pot on the stovetop over medium-low heat.

Can I Freeze It?

Yes! You can freeze the knoephla itself by placing the bite-sized pieces on a baking tray lined with parchment paper, then popping it into the freezer for an hour. Once the knoephla have frozen, transfer them to an airtight, freezer-safe bag and freeze for up to 3 months. You can add them frozen to your soup base and just increase the cooking time by a few minutes.

If you want to freeze the soup, let it cool to room temperature and then ladle it into airtight, freezer-safe containers. Be sure to leave 1-inch of space at the top so that the soup has room to expand. Freeze for up to 3 months, then thaw overnight in the fridge and reheat as described above. 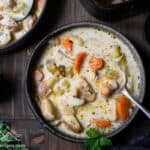 This cozy Knoephla Soup recipe features homemade dumplings and tender chicken breasts. Everything is cooked together in a creamy soup base dotted with sliced carrots and potatoes. It’s perfect cold-weather food!

Make the Soup Base

Melt the butter in a large pot over medium heat. Add the carrots, celery, onions, a generous pinch of kosher salt and a pinch of black pepper. Cook, stirring often, until the vegetables soften, about 8-10 minutes. Add the garlic and and cook. stirring constantly, about 2 minutes. Add the thyme and parsley, then stir everything together.

Add the vegetable broth and water. Add the chicken breasts. Increase the heat to medium-high and bring the soup to a boil. Reduce the heat, cover the soup and simmer for 40 minutes.

Add the egg and stir into the dough. Then begin adding the milk 1/4 cup at a time, mixing between additions, until a soft dough forms. The dough should be firm enough to hold its shape and not sticky.

Turn the dough out onto a lightly floured counter. Pat into a ball and cut the ball into 4 pieces.

Finish the Soup / Cook the Dumplings

When the soup has 20 minutes of simmer time left, add the knoephla to the soup, cover, and continue to simmer.

Remove the soup from the heat and stir in the cream. Adjust the salt and pepper as needed, stirring between additions.