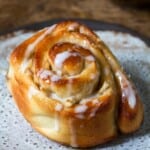 These Apple Pie Cinnamon Rolls have all the flavors of a classic apple pie stuffed in cinnamon bun form. Fluffy buns are swirled around tender apples, then drizzled with a simple vanilla icing.

Remember that time I decided to chase a wild and crazy idea by combining an apple crisp with overnight french toast? And then I added bourbon to it? The end result was ah-mazing and…. I think I did it again. Except this time, I kitchen magick-ed apple pie into cinnamon rolls!

The inspiration came about pretty much like this. There I was looking at our haul of apples from an orchard visit and lighting done struck my brain. Right then and there, I decided that I was going to make cinnamon buns that tasted like apple pie. Then, I was going to put icing on them.

The end result? Fluffy homemade cinnamon rolls filled with tender diced apples and caramelized brown sugar. A simple vanilla icing drizzled on top seals the deal. It’s so good. You have to make this recipe friends.

The Best Apples for Baking

The best kinds of apples to use for this recipe are going to be ones that will hold their shape after being baked vs. turning into mush. The gold standard for baking are Granny Smith apples, but I actually used Mutsu apples from our recent apple picking adventure. Mutsu apples have firm flesh and are less tart than Granny Smiths.

Here are a few other apple varieties that are ideal for baking:

If you can’t find any of the above you can use any apple you have on hand. The results will still be delightful! The above are just my top picks for apples that have the ideal balance of crispness and sweetness.

These cinnamon buns are pretty easy to make but here are my top tips for perfect results every time:

Want to Use Frosting Instead of Icing?

I used a simple icing for these cinnamon rolls but you could also use a cream cheese frosting. My recipe for homemade overnight cinnamon rolls has a fantastic frosting that you could use with this apple recipe.

This recipe makes a generous amount of cinnamon rolls, so I usually use a 9×13 baking dish and a 9×9 baking dish. If your oven is large enough to fit both baking dishes at once, you can bake both at the same time. If not, there is no issue with just letting one set of buns proof a bit longer while the first one bakes.

Really you can use any size baking dish you want so don’t worry about it too much. Just slice the dough and then add the buns to your baking dishes to let the buns proof before baking.

How to Store Cinnamon Rolls

Let the cinnamon rolls cool completely, then cover your baking dish with saran wrap and store them on the counter for up to 3 days. You can extend their shelf life by placing your wrapped baking dish in the fridge, where they will keep for up to 7 days.

If your fridge is not big enough to store the entire baking dish, you can also cut out the cinnamon rolls and store them in tupperware containers. The key is to use airtight containers so that the dry air in the fridge doesn’t dry out your cinnamon buns.

Can I Freeze Them?

Yes, you can definitely freeze these after they have been baked. Here’s how:

When you are ready to eat some, let your cinnamon buns thaw overnight in the fridge. If you have frozen single servings, you can let them thaw on the counter for a few hours, or you can remove the saran wrap and zap them in the microwave for about 20-30 seconds until they have warmed up a bit and the center is no longer frozen. 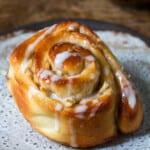 These Apple Pie Cinnamon Rolls have all the flavors of a classic apple pie stuffed in cinnamon roll form. Fluffy buns are swirled around tender apples, then drizzled with a simple vanilla icing.

In the bowl of a stand mixer or in a large bowl, combine the yeast, water and milk. Allow to proof for 5 minutes, then add the olive oil, sugar, eggs and vanilla, mixing well. Add the all-purpose flour 1/2 cup at a time until the dough pulls away from the sides of your bowl and forms a sticky ball.

Switch to your dough hook or turn the dough out onto a floured surface. Knead for 2-3 minutes by machine or 3-4 minutes by hand. The dough is finished when it is smooth and bounces back when you press your finger into it.

Grease a large bowl with about 1 tsp of olive oil and place the dough in, turning once to coat. Cover with saran wrap and allow to rise in a warm place for 1 hr.

Melt the butter, set aside.

In a medium bowl combine the brown sugar, granulated sugar, and cinnamon, mixing well. Set aside.

Peel and dice the apples, set aside.

Grease your pans with baking spray. I usually use a 9×13 baking dish and a 9×9 baking dish. Set aside.

Roll out the dough on a lightly floured surface. It should be about 10×20 inches, but no need to be precise about it. Just make sure you don’t roll the dough too thin or the buns won’t be fluffy like you want them to be. The long side of the dough should be perpendicular to your body.

With a pastry brush, coat the dough with the melted butter, going right up to the edges of the dough. Sprinkle the sugar mixture over the dough, leaving a one-inch margin along the edges. Sprinkle the apples over the top, spreading them around with a spoon and gently pressing the apples down into the dough.

Tightly roll the dough into a log with the rolling action going away from you. I like to fold either side of the dough in as I roll to prevent any filling from falling out.

With a serrated knife slice the log into pieces about 2 inches thick. Place the buns in your prepared trays about 1/2 inch apart so that they aren’t touching and have room to rise. Cover with saran wrap and allow to rise for 45 minutes.

Bake and Add the Icing

Preheat your oven to 375 degrees F. Bake the buns for 20-25 minutes or until they are golden brown. Set aside to cool.

In a small bowl combine the confectioners sugar, vanilla and milk. Start with 1/3 cup of milk and adjust the thickness of the glaze to your liking by adding more milk by the tablespoon and mixing until smooth between additions. If you add too much milk, just add more sugar until the glaze thickens up a bit.

Drizzle the glaze over the cooled buns. Dig in. 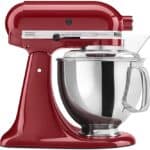