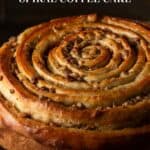 This Morning Bun Spiral Coffee Cake with Nuts and Orange Marmalade is made to impress! Swirls of nutty brown sugar-cinnamon filling are nestled in a brioche-like dough for a coffee cake like no other.

Calling this recipe a coffee cake doesn’t really do it justice. When you think of coffee cake, you probably think of a square of vanilla-flavored cake topped with streusel like my Apple Crumb Coffee Cake. You definitely don’t picture spirals of marmalade-brushed brioche filled with finely chopped nuts and a buttery brown sugar streusel.

But maybe after you make this recipe, you will!

With the holidays just around the corner, your brunch and breakfast schedule is probably about to start filling up. Whether you’re hosting a get-together with friends or family or you’re a guest at someone else’s home, this spiral coffee cake is a guaranteed show-stopper. Pair it with a mug of homemade gingerbread latte for the ultimate hygge holiday experience! Maybe even serve it up with slices of cozy bread pudding.

Despite the stunning looks of this recipe, the ingredients needed to make it are simple! Here’s a quick round-up with notes as needed. Be sure to scroll down to the recipe card for specific amounts.

This recipe has a lot of steps, but it’s not necessarily hard. Follow along with the images below to guide you through the process.

Make the filling. Melt 2 tablespoons of butter in a large bowl in the microwave or in a saucepan. Stir in the nuts, followed by the brown sugar and cinnamon. Set aside.

Combine milk and butter. Cut the remaining butter into pieces and place it in a large bowl with the milk. Microwave for about a minute (or warm it on the stovetop), or until the mixture is warm but not hot.

Proof the yeast. Pour the milk and butter mixture into a large mixing bowl or the bowl of a stand mixer. Sprinkle in the yeast, then stir. Let the mixture rest for 5 minutes.

Make the dough. Add a cup of flour to the bowl with the yeast and stir to combine. Next, add 1/2 teaspoon of cinnamon, nutmeg, sugar, salt, and 2 eggs. Mix well, then incorporate the remaining flour 1/2 cup at a time. The dough should be soft and pull away from the sides of the bowl when it’s done.

Roll out the dough. Transfer the dough to a lightly floured work surface and roll it out to an 18×10 inch rectangle.

Top the dough. Brush the melted marmalade onto the surface of the dough, then scatter the pecan-walnut mixture over the top. Use a rolling pin to press the nut filling into the dough a bit to keep it in place. Cut the dough lengthwise into 2-inch-wide strips.

Make your spiral. Take one strip and roll it around itself, then place it in the center of the prepared springform pan, cut side down. One at a time, wrap the remaining strips around the center, until you have a spiral. Cover the dough loosely with plastic wrap and let it rise in a warm spot away from drafts for 30 minutes, or until it has doubled in bulk.

Bake the cake. Preheat your oven to 350ºF and beat the yolk from the remaining egg with a fork. Brush the coffee cake with the egg, then place the pan in the oven and bake for 30 to 35 minutes, or until golden brown.

Cool and serve. Let the coffee cake cool for 5 minutes, then run a butter knife around the edges and remove the sides of the springform pan. Serve warm or at room temperature.

Here are some tips to make sure your spiral coffee cake turns out perfect!

This giant morning bun cake is best eaten within a day or so. If you’re making it for a gathering, make sure you don’t make it too far in advance! Once it has cooled to room temperature, wrap it in plastic wrap and store it on the countertop. I usually just put it on a big glass plate or even use a cake stand with a lid.

Can I Freeze it?

Yes, if you want to get a head start on making this, you can freeze it for up to 2 months. Wrap it in two layers of plastic, then let it thaw at room temperature overnight before serving. 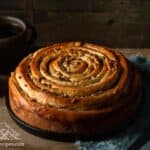 Swirls of nutty brown sugar-cinnamon filling are nestled in a brioche-like dough for a coffee cake like no other.

Prep. Spray a 10-inch springform pan with PAM or another baking spray.

Make the walnut filling. Melt 2 tablespoons of butter in a large bowl by heating it in the microwave for about 30 seconds or in a saucepan on the stove over low heat. Add the chopped pecans and walnuts, then the brown sugar and 1 teaspoon of ground cinnamon. Mix well, then set aside.

Warm the milk and butter. Cut remaining 4 tablespoons of butter into small pieces, then combine with the milk in another large bowl. Microwave for about 1 minute or on the stovetop over low heat, until very warm. If the milk is hot let it cool off a bit before proceeding – it should be about the temperature you would put in a baby’s bottle.

Proof the yeast. When the milk/butter mixture is warm – not hot – pour it into a large mixing bowl or the bowl of a stand mixer. Add the yeast, stirring once with a spoon. Allow mixture to rest (proof) for 5 minutes.

Make the dough. Add 1 cup of flour to the yeast mixture and mix until blended. Add ½ teaspoon of cinnamon, the nutmeg, sugar, salt, and 2 eggs, mixing well. Add remaining flour ½ cup at a time until you have a soft dough that pulls away from the sides of the bowl. Using a stand mixer, knead for 8 minutes, sprinkling with flour as needed until you have a smooth dough. If kneading by hand, turn the dough out onto a lightly floured surface and knead for 10 minutes, adding additional flour as needed. Allow dough to rest for 10 minutes.

Roll the dough out to an 18×10 inch rectangle. Brush the melted marmalade all over the surface of the dough, then sprinkle your pecan-walnut mixture on top. Press the nut filling into the dough by lightly rolling over it with a rolling pin.

Assemble your giant morning bun. Cut the dough lengthwise into 2-inch-wide strips. Take one strip and roll it around itself before placing it in the center of your springform pan, cut side down. Now, one at a time, wrap the remaining strips around the center strip, until you have a mass of shaped dough that looks like this. Cover loosely with plastic wrap and let the dough rise in a warm spot for 30 minutes or until doubled in bulk.

Preheat your oven to 350 degrees F.

Make an egg wash. In a small bowl beat the yolk from the remaining egg with a fork, then brush the coffee cake with it.

Bake for 30 to 35 minutes, or until golden. If the middle of the coffee cake browns faster than the outer portions of dough, cut a small square of aluminum foil and place it over the part of the cake that is browning faster.

Cool and serve. Cool coffee cake for 5 minutes before running a butter knife around the edges and removing the sides of the springform pan. Serve warm or at room temperature.

This giant morning bun is best enjoyed within a couple days of making it. Store on the counter covered with saran wrap or in a cake stand.