Skip to content
Don't miss a new recipe!
Get an email when recipes are published.
Subscribe Now!
Home » Recipes » Dessert
Jump to Recipe·Rate this Recipe 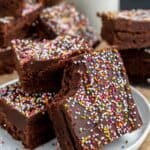 These Cosmic Brownies are rich and chewy brownies covered with fudgy frosting! Topped with rainbow sprinkles, these homemade brownies are a trip down memory lane.

These easy homemade brownies hit all the notes dear to my heart: they’re fudgy, they’re chewy and they’re colorful! Based on the classic Little Debbie’s Cosmic Brownies, every bite of these chocolatey morsels is like a throwback to the 1990s. I snacked on more than a few of these in my early college days when access to a kitchen was a luxury and late-night study sessions were fueled by an ungodly amount of caffeine and chocolate. But now that I’m all grown up and have my very own kitchen? We’re going the homemade route baby.

These from-scratch brownies are a fresher and fudgier version of cosmic brownies. Chocolatey, chewy, and gooey, these brownies are a real treat. Rainbow-colored sprinkles are generously added on top of fudgy frosting, giving the brownies a little crunch that contrasts beautifully with the soft brownies.

What Are Cosmic Brownies?

Cosmic Brownies came out in September 1999. The Little Debbie’s company created them with the Cosmic Bowling trend in mind, which is when a bowling alley sets up lasers, colorful lights, music, and other special effects for people to enjoy while they bowl.

Little Debbie’s “Cosmic Brownies” are usually topped with candy-coated, rainbow-colored chocolate chips. However, in the US it’s difficult to find rainbow candies or sprinkles that don’t use artificial red food dye made from petroleum. So instead of candy bits, I used plant-based nonpareil sprinkles (affiliate link). This is a simple switch and you still get those gorgeous colors. If you want another fun recipe where I do the same thing, try my homemade Frosted Animal Crackers!

The ingredients for this recipe are super simple, as they should be for a brownie recipe! Here’s what you’ll need. Be sure to scroll down to the recipe card for specific amounts.

For the Frosting & Sprinkles

What do the cornstarch and corn syrup do in this recipe?

Cornstarch and corn syrup are your fudgy brownies’ best friends in this recipe. They take your brownies’ texture to the next level and make them moist, chewy, and out-of-this-world good! Cornstarch makes your brownies thicker and gives them a better crust. Corn syrup helps your brownies to not get grainy and makes them shinier because it prevents large sugar crystals from forming in them.

How to Make Cosmic Brownies

There are only a few simple steps to take to make these almost cosmic brownies. Here’s what to do:

Prep your tools. Preheat the oven to 350°F. Prepare an 8×8-inch baking pan by measuring and lining the bottom with a cut piece of parchment paper. Lightly mist it with cooking spray or brush it lightly with oil, then set it aside.

Begin mixing your batter. In a medium saucepan, melt the butter on low heat. Once all the butter is melted, remove it from the heat and pour the melted butter into a large mixing bowl. Add in the granulated sugar, brown sugar, and cocoa powder. Stir it until it’s combined.

Finish your batter. In the same mixing bowl, stir in the eggs, vanilla extract, and corn syrup. Gently mix in the flour, corn starch, baking powder, and salt. The batter should be thick in texture.

Spread and bake. Scoop the batter into the prepared baking pan. Gently spread the batter evenly with the back of a spoon. Bake it in the preheated oven for 25 minutes. Let it cool completely before frosting it.

Cool and Enjoy. Place the brownie pan in the refrigerator for at least 1 hour to allow the frosting to harden and set. Once the frosting is set, cut the brownies with a sharp knife and enjoy!

What Other Toppings Can I Use?

Shake up your brownies’ toppings and try something new if you’re not feeling the sprinkles! Here are a few topping ideas that would make any brownies even more magical:

The Best Way to Slice Brownies

If you want to cut your brownies into pretty slices that are neat and tidy, be sure to let the frosting harden before you slice them. I recommend putting them in the refrigerator for at least two hours or the freezer for one hour before cutting them.

Use a chef’s knife to give your brownies clean edges. Cut your pan of brownies with downwards motions and make individual cuts (instead of treating it like a tree you’re sawing and cutting it back and forth). Take the knife out and wipe it off after each cut. This will make it so that nothing sticks to the knife and messes up your brownies.

How to Store Brownies

I recommend storing these brownies in the fridge where they will keep for 3-4 days. Before you put them in the fridge, let them reach room temperature. Then, use saran wrap to cover the pan or cut them up and put them in an airtight container before you transfer them to the refrigerator.

These almost cosmic brownies do well in the freezer! Since they’re super fudgy and the frosting is soft, you can enjoy them frozen without bothering your teeth.

Freeze these brownies after they reach room temperature. You can chill them in the fridge to make the frosting harden a bit and make them easier to cut. Then cut them into squares, wrap them individually in a few layers of plastic wrap and transfer them to a freezer-safe airtight container.

To thaw your brownies, defrost the number of brownies that you want to eat in the fridge overnight. You can also leave them on the counter to defrost for a few hours. If you want to eat your brownies right away and don’t want to wait a long time for them to thaw, remove the saran wrap and put them individually in the microwave for about 30 seconds. 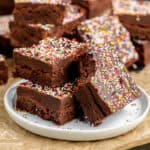 Extra brownies can be refrigerated in an airtight container for up to 1 week.