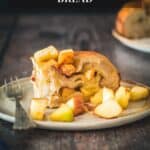 This Apple Harvest Bread is truly a sight to behold. A beautiful golden loaf of sweet, pillowy bread tucked with cinnamon-spiced apples, this is the kind of recipe that is sure to become a fall tradition.

In case you couldn’t tell, I’m on quite the fall baking kick. If you’ve made my Pumpkin Apple Apricot Bread and thought to yourself, “I need to make more yeasty fall bread recipes, ASAP!” then Apple Harvest Bread should be next on your list. Like Pumpkin Apple Apricot Bread, the bread has the cloud-like texture of a brioche, but it’s also packed with apples. So many apples!

Although two apples may not sound like much, once you’ve diced them and added them to the bread, you’ll see that it’s a lot. This is a good thing! The apple-to-bread ratio in this Apple Harvest Bread recipe is what makes it so unique. I feel pretty confident saying you’ve never had anything like it; it’s a bit like a German-style strudel, with a soft, vanilla-scented brioche replacing the thin, flaky pastry traditionally used.

Is your mouth watering yet?

The apples are the star of the show in Apple Harvest Bread, so get some good ones. This recipe is ideal for making right after you’ve hit up the apple orchard and filled a bushel (or several) with freshly-picked apples. Here’s a rundown of all the ingredients you’ll need for this recipe:

Baking is a science, so keep the dough recipe as-is. There’s room to play around with the filling, though:

For a truly over-the-top bread loaf, add cream cheese frosting or serve with a dollop of maple whipped cream.

How to Make Apple Harvest Bread

This Apple Harvest Bread recipe is a good weekend project. It’s not necessarily difficult, but it does take some time since it’s made with yeast. Here’s how to make it:

Proof the yeast. Combine the yeast and warm water in a large bowl (or the bowl of your stand mixer) and let it rest for about five minutes.

Make the dough. Add the agave, salt, two eggs, vanilla, and 1/4 cup of olive oil. Use a wooden spoon or the paddle attachment of your mixer to stir in a cup of flour. Keep adding flour a half cup at a time and continue mixing until the dough becomes too stiff to stir.

Knead the dough. Turn out the dough onto a lightly floured work surface and knead it until it’s soft and springy; smooth with some small air bubbles just under the surface, about four minutes. (Alternatively, you can use the dough hook in your stand mixer to do the kneading.) If you find that the dough is sticky, dust it with flour.

Let the dough rise. Grease a large bowl or Dutch oven with a teaspoon of olive oil, then place the dough inside, turning once to coat it in the oil. Cover the bowl with plastic wrap and place it in a warm location, away from drafts. Let the dough rise until it’s doubled in size, which should take between 1 1/2 to 2 hours.

Prepare the apples. Toss the diced apples with cinnamon sugar in a bowl.

Assemble the bread. Grease a springform pan with non-stick cooking spray. Roll out the dough and assemble, then let the bread double in bulk again for about an hour.

Get ready to bake. Preheat the oven to 325ºF and whisk one egg with a teaspoon of water. Brush the top of the dough with the egg wash.

Bake the bread. Place the springform pan in the oven and bake the bread for 55 to 70 minutes, or until it’s baked through in the middle and a deep, golden brown on top. If you notice the bread is browning too quickly, you can tent it with aluminum foil.

Cool and serve. Let the bread cool on a baking rack for at least 20 minutes, then loosen the loaf by sliding a butter knife along the edges. Remove the springform sizes or invert the bread onto a large plate; place a second plate on the bottom of the bread and invert it again to turn the bread right-side-up.

Your Apple Harvest Bread will turn out perfect when you follow these suggestions:

How to Store Apple Harvest Bread

This Apple Harvest Bread recipe is similar to any other bread in that it will keep for 3 to 4 days when wrapped tightly and stored at room temperature—but it’s always better a day or two after baking.

Can You Freeze This Recipe?

Yes! You can freeze Apple Harvest Bread by wrapping it tightly with plastic wrap, then a layer of foil. (I always like doubling up to prevent freezer burn.) Pop the loaf in the freezer and use it within a month or two. When you’re ready to serve the bread, let it thaw at room temperature. 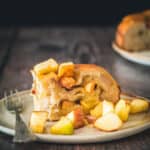 This Apple Harvest Bread is one part brioche, one part strudel, and two parts amazing.

To assemble the bread:

To bake the bread:

TIP: Place a cookie sheet lined with aluminum foil on the oven rack below your bread to catch any apple juice/sugar drippings if they escape from the pan.