Skip to content
Don't miss a new recipe!
Get an email when recipes are published.
Subscribe Now!
Home » Recipes » Mug Recipes » Apple Crisp in a Mug
Jump to Recipe·Rate this Recipe 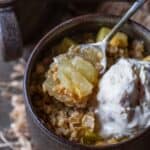 This easy apple crisp in a mug is ready in minutes! Top it with vanilla ice cream and dig into a cozy apple dessert without even turning your oven on.

I recently shared my favorite oven-baked apple crisp. That recipe remains my go-to when I want to dig into a warm bowl of soft cinnamon-spiced apples with a tender oat topping. But you know what? Sometimes mama wants her apple crisp right now. As in, I don’t want to wait for the oven to preheat and my apple crisp to bake.

That’s where this mug version comes in. It’s basically a miniaturized take on my apple crisp recipe. It comes together in minutes and is every bit as delicious. Careful though: once you try this recipe – or any of my mug cake recipes for that matter – time and effort will no longer be a barrier when you want to indulge in something sweet. If it’s midnight and you have the ingredients in your house, nothing is stopping you from making this apple crisp dessert at the spur of the moment! I once caught my 10-year-old eating one well past bedtime. I couldn’t be mad because well, they did show gumption right?

This recipe follows many of the same rules as my mug cake recipes. Some of those bear repeating here, and there are also a few tips specific to this apple crisp:

How to Serve Apple Crisp in a Mug

I usually eat my apple crisp straight out of the mug, but you could also spoon it into a bowl and top with your preferred fixings there. Vanilla ice cream or whipped cream are my go-to topping choices! But if you want to be a bit healthier, this apple crisp is tasty enough to eat by itself.

Apple Crisp in a Mug 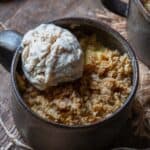 This easy apple crisp in a mug is ready in minutes! Top it with vanilla ice cream and dig into a cozy apple dessert without even turning your oven on.

Cook the apples. Place diced apples in your mug. Add the water, sugar, and cinnamon. Give them a quick stir to combine. Microwave for 2 minutes, pausing halfway through to stir the apples.

You want the apples to soften so depending on your microwave strength you may need closer 3 minutes. You can add an extra splash of water if the apples are too dry at the 2-minute mark. Once the apples are softened, set aside.

Make the topping. In a bowl combine the oats, flour, brown sugar, salt and melted butter. Stir well until the oats and flour have been incorporated.

Finish cooking. Spoon topping over the microwaved apples. Microwave for 1 minute 30 seconds to 2 minutes, until the oats have softened and cooked.

Cool and serve. Allow to cool for 5 minutes, it will be HOT. Top with a scoop of ice cream and dig in.

*Use two apples if you want a lot of apple filling